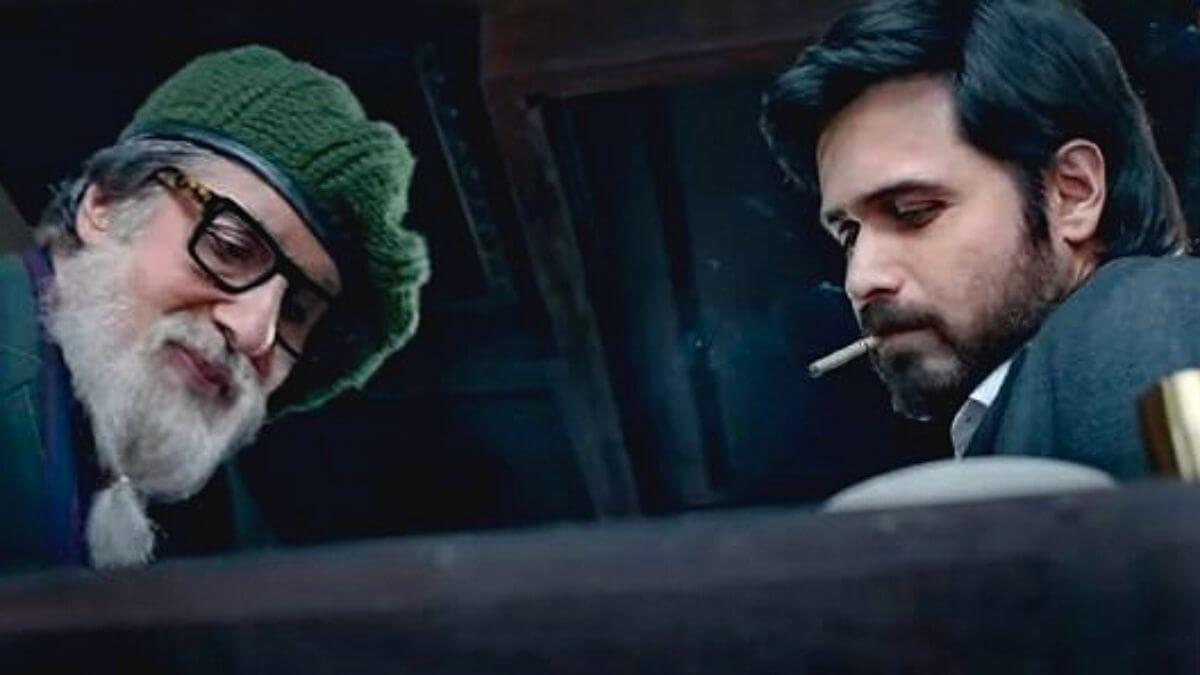 An old German novel Die Panne (1956) by Friedrich Durrenmatt, with an intriguing vigilante concept has been adapted multiple times for the radio, stage and screen; in India, typically, without acknowledging the original.

Rumy Jaffrey has co-written (with Ranjit Kapoor), and directed Chehre, with Amitabh Bachchan and Emraan Hashmi heading a fine cast. It is the level of acting that ultimately saves the stodgy film from descending into utter tedium.

Not even disguising its wordy stage origin, using the kind of Urdu legalese that used to spoken in courtroom dramas of the past, Chehre is set in a too-grand mansion in the hills. A cocky – how else could Emraah Hasmi’s casting be justified—adman Sameer Mehra’s car breaks down in a snowstorm when he is on his way to Delhi. Paramjeet Singh Bhullar (Annu Kapoor) just happens to be wandering in the cold, and leads him to the home of Jagdish Acharya (Dhritiman Chatterjee), where a third friend Hariya Jatav (Raghuvir Yadav in an unrecognizable get-up) is present, and the fourth, Lateef Zaidi’s (Amitabh Bachchan) arrival is awaited. The house has a server called Anna (Rhea Chakraborty), and a glowering Joe (Siddhant Kapoor) hovering around doing nothing.

When Zaidi walks in, wearing a green beret and beard in a ponytail, the proceedings move from drinks and small talk to serious business. Turns out, the three men are retired legal professionals, and the fourth is a hangman. For entertainment, they play a game in which their captive guest is subjected to a trial for a crime—and everybody has committed one, says Zaidi over Sameer’s protest that he has never done anything wrong.

Sameer agrees to participate in the game, because he cannot leave while the storm is raging, so Zaidi takes on the role of the prosecutor, Bhullar plays the defence attorney and Acharya the judge. It turns out that Sameer has been guilty of some serious wrongdoing, egged on by his married lover Natasha (Krystle D’Souza, but his excuse is “everyone does it.” Sameer is also portrayed as somewhat creepy, the way he hits on Anna the first chance he gets, though the flashback shows him to be quite gullible where women are concerned.

In case a viewer is wondering why Amitabh Bachchan (strangely credited as a guest appearance) even agreed to do this film, he gets a lengthy monologue towards the end about crime and punishment, which has nothing to do with the case they are handling; he also gets to recite a poem in the beginning.

If the codgers had been playing this game in the past, then why does Zaidi trot out that speech to wrap up Sameer’s case? Also, in proving Sameer’s guilt, there were some very convenient clues, like a phone left unattended, and car keys accidentally dropped.

There is nothing much for Emraan Hashmi to do, but he still strives to move from smart aleck to desperate convincingly. Chehre has been released in the theatres, wherever they have reopened, but this one would have fared better direct to OTT.